Another month gone, another blog post not done … and so again I share my the most recent bulletin I wrote for CoCreating Clarity! Enjoy!

Describing my work to others has often been a challenge, both today with CoCreating Clarity and very often in the past. Why? Because so much of the time, it has been about exploring, creating, and claiming new ground for effective collaboration across traditional boundaries – both in individual thinking and in organizational structures.

The challenge of explaining what I did arose yet again one day! 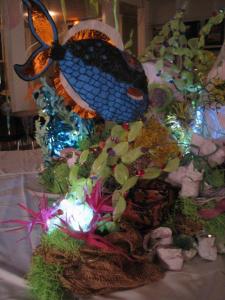 This time to my new manager, Tony Lauck, the brilliant technical director of the engineering group I was in. My exasperation led me to create this analogy for him:

I do, however, show people how to decide for themselves whether they should be fishing in the first place, or whether perhaps they should be out hunting bear instead! …

That’s what Systems Thinking, the associated forums, the collaboration I’m creating is all about!

He got it right away! That was eighteen years ago.
Tony remains a dear and valued friend.
A few weeks ago explaining to him what I am now doing in CoCreating Clarity, he responded:

“As to creating clarity …
It’s a good idea, but there are several reasons why people don’t create clarity.
Some people don’t think it is valuable, let alone necessary.
Others want it, don’t know how to achieve it, but are willing to try.
Still others are just plain lazy.
Perhaps you can help all of these people.
The hard ones are the ones that don’t want clarity because they want to exploit misunderstandings.
I don’t know how you deal with these people, they are out there, unfortunately.”

I got it right away!

“We believe that at the root of many business problems is the absence, avoidance, or breakdown of communication between eople.” C.I. Strutt

So for now CoCreating Clarity is focused on people who “want it, don’t know how to achieve it, but are willing to try.” Starting with those in the world who are willing seems to be a good thing to do.

My intention is to effortlessly and painlessly assimilate the others … they won’t even realize it’s happening! Resistance is futile! J

Like Loading...
This entry was posted in Clarity and tagged Clarity, CoCreating Clarity, Fishing, Systems Thinking. Bookmark the permalink.